”There are no speed limits on the road to success”

Few people are as quick as they want to be. We’re not just talking sheer speed—we’re talking about the fraction of a second it takes to respond to a stimulus, such as a skier cutting you off on a slope or a squirrel darting in front of your car. “There aren’t many sports where reaction time isn’t important,” says York-­Peter Klöppel, a sports psychologist at Red Bull’s Athlete Performance Center near Salzburg, Austria. “The environment can change in a split second. There are a variety of different responses to every change, so every reaction is also about quick decision-making.” A number of factors can affect a person’s reaction time, including age, level of recovery, and anxiety level. But even accounting for those external influences, it’s possible to develop quicker instincts. Here are five variations of drills Klöppel uses with his athletes. Add them to a workout or do them on their own for five minutes, five times a week. You might notice some improvements as early as the second week, but keep working on it regularly. As with physical training, if you stop exercising your mental fitness, it will gradually decline.

What: Tests basic reaction time.
How: Have a partner hold a ruler vertically a few feet in front of you at chest level. Position your thumb and index finger on either side of the bottom of the ruler without touching it. When your partner drops the ruler, catch it between your fingers, noting the distance it falls. The shorter the distance, the faster you’ve reacted.

What: Improves reaction time and decision-making speed.
How: Stand in a ready position on the balls of your feet, knees slightly bent, and head up. Have a partner hold two tennis balls within arm’s reach in front of you. Rest your hands on top of your partner’s. When they drop a tennis ball, try to catch it before it hits the ground. If they drop both, catch both. To make it harder, number the balls one and two, and have your partner call out the number of the one you should catch.

What: Improves foot speed, hand-eye coordination, and reaction time.
How: Grab a misshaped ball, like a Sklz Reaction Ball, which bounces unpredictably. Hold it about head high, using the ready stance. Drop the ball and catch it after the first bounce. Repeat, but catch it after the second bounce, then the third bounce. The ball’s behavior becomes more erratic with each additional bounce.

What: Drills reaction time and decision-making in stressful situations.
How: Play fast-paced video games like FIFA or Forza, a car-racing series. “These games are all about making fast decisions over and over,” Klöppel says. “Some studies have suggested that athletes who play action games show an improvement in reaction time.” Just don’t overdo it. A couple of short sessions a week should do the trick. 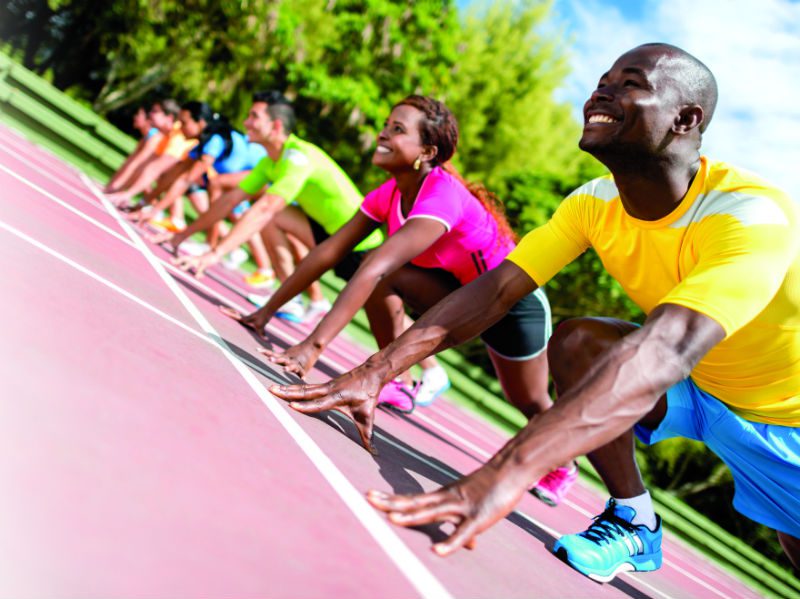