“Gratitude turns what we have into enough.”

It’s not truly Halloween until you have a pumpkin sitting on your doorstep. Yet every year, you probably notice that after a day or two, your jack-o’-lantern’s face starts to sag—then collapses into an orange lump. It’s certainly creepy, but perhaps not exactly the look you’re going for.

A pumpkin is a fruit, after all, so it’s unrealistic to expect it to last forever. So how long does a pumpkin last, and is there any way to preserve a jack-o’-lantern so it still looks perky by the time trick-or-treaters pay a visit? Here’s some advice to keep your pumpkin in decent shape, and what to expect in terms of its life span so you can carve/decorate accordingly.

How long do pumpkins last?

Uncarved pumpkins can last for two to three months, says Marc Evan, co-founder of Maniac Pumpkin Carvers. But just how long will depend on which pumpkin you pick. Choose a pumpkin that’s hard rather than soft, and free of blemishes or rot.

As for carved pumpkins, aka jack-o’-lanterns, their life span is much shorter.

“If you put a jack-o’-lantern on your front porch, those tend to spoil in a couple of days, or at least they start getting moldy within a few days,” says Evan.

How to make pumpkins last longer

Pumpkin maintenance can extend its life. Keep a pumpkin out of direct sunlight, which breaks down its flesh. Temperature and humidity fluctuations have the biggest impact on pumpkins, Evan says.

Excessively warm temperatures promote fungal and bacterial growth, which causes pumpkins to rot. One way to slow this process is to bring pumpkins inside if it gets too hot out.

Cold temperatures can also speed up decomposition, says Mark Wessel, director of horticulture research at Gardens Alive. So if the temperature dips below freezing, bring your pumpkins inside or cover them outdoors with a sheet or blanket (with any candles within unlit, of course).

Not leaving pumpkins outside all the time also protects them from creatures like mice and raccoons, who like to nibble on this fruit, Evan says.

But even without wild weather fluctuations, carved pumpkins sitting around on your front porch or kitchen countertop will spoil (and likely attract fruit flies) in a matter of days. Sticking it in the refrigerator when it’s not on display can also extend its life span.

“It’s a fruit, so if you refrigerate it, it lasts longer,” Evan explains. “We like to wrap them tightly in plastic wrap, so they retain their moisture.” 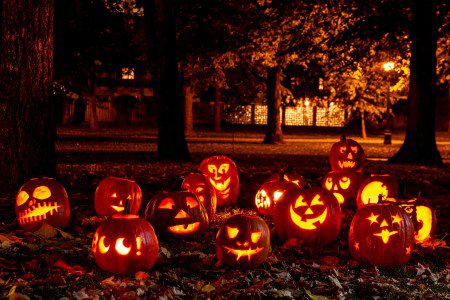 How to make a jack-o’-lantern last longer

How you carve the pumpkin can make it last a little longer. A classic jack-o’-lantern style—where you carve all the way through—spoils much faster than an etching design, which is carved just on the pumpkin’s surface. An etched pumpkin will last about a week.

Once a pumpkin is carved, you can make it last longer by washing it inside and out in soapy water, and/or soaking it in a solution of 1 teaspoon bleach per 1 gallon water for eight hours before drying it off for display.

“The same concentration of bleach solution can be sprayed daily on the inside and outside of the pumpkin,” says Wessel. “This has dual purposes. The bleach kills bacteria that cause rot, and the water helps keep the pumpkin hydrated.”

This method is safe for pets, Wessel says. Just make sure to wait until the pumpkin dries before displaying it within pets’ reach. A more natural, nontoxic preservative is to spray the pumpkin with lemon juice or vinegar diluted with water.

Wait until closer to Halloween to carve your pumpkin

Decorating your porch with uncarved pumpkins will keep your decorations intact for longer. Pumpkins come in all shapes, sizes, and colors, and you can decorate them many different ways.

“If you’re looking for ways to preserve your pumpkin throughout the fall season, painting instead of carving creates longer-lasting decor,” says Gary McCoy, store manager of Lowe’s in Charlotte, NC.

Another option is to wait to carve your pumpkin until a few days or a week before Halloween.

“The best way to make sure your pumpkin looks great for Halloween is to delay carving as long as you can,” Wessel says. “Even with the best care, a pumpkin is a soft-fleshed fruit and will decay rapidly after carving.”

“The clock starts ticking as soon as you start cutting into it,” adds Evan.

Love having a jack-o’-lantern to display all season long? Just keep carving more pumpkins, Evan suggests. Once one goes bad, replace it with a new one.