Check out the schedule here!

Welcome to the 28th season of Music in the Vineyards festival! We are very excited to return to ‘normal’ this summer with exhilarating concerts in stunning winery settings, an experience only found in the Napa Valley.

Music in the Vineyards is a nationally-acclaimed chamber music festival held each August in the Napa Valley. The festival showcases nearly 40 world-class artists-in-residence from the U.S., Europe and Canada performing new and classic chamber music repertoire in stunning winery settings. Each concert is hosted by a different Napa Valley winery in barrel rooms, caves and event spaces.  With complimentary wine tastings at each intermission and breathtaking views of the wine valley, this unique combination of wine country ambiance and world class talent allows artists and audiences alike to experience chamber music in an intimate setting as it was intended to be performed.

We have an extensive community outreach program taking live chamber music performances to retirement homes, Boys’ and Girls’ Clubs and alternative venues throughout the Napa Valley.  The performers for our outreach program are the winners of our String Quartet Fellowship Program, this exclusive program provides one young string quartet with multiple performance opportunities alongside our roster of distinguished musicians, intensive coaching and mentorship with the finest professional chamber musicians performing today.

We are a non-profit organization and host various fundraising events throughout the year, such as in 2021 Icons of Design and in 2023 an exclusive musical trip to Vienna and Prague. 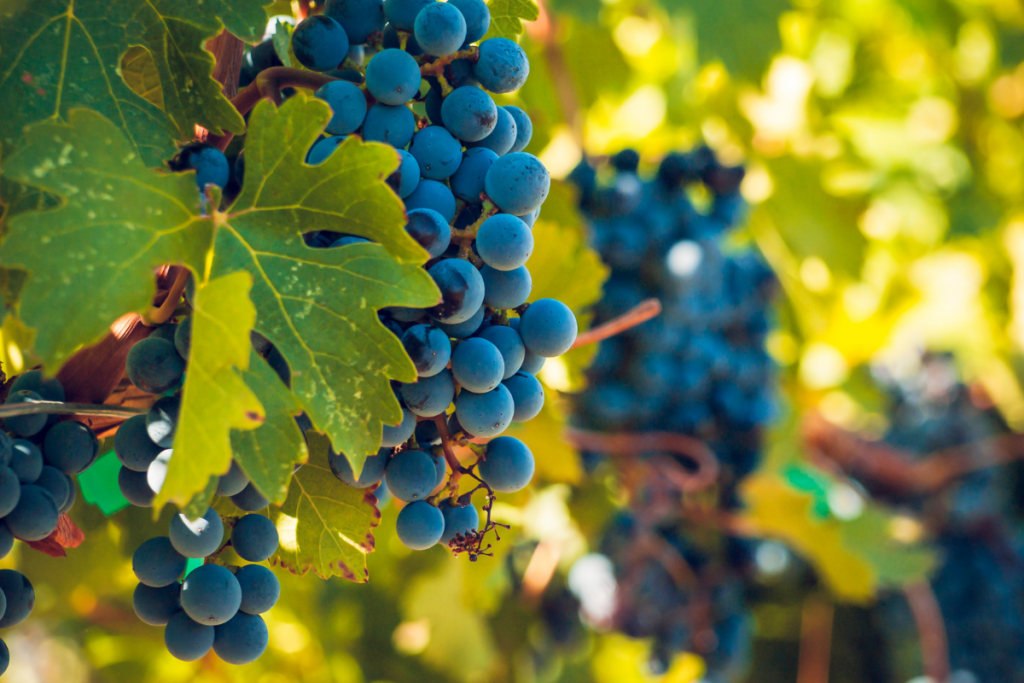 Once upon a time, two young orchestral musicians who loved to play chamber music realized the best way to increase their opportunities was to start their own chamber music festival. Daria and Michael Adams, who both had orchestra jobs in Minneapolis/St. Paul, fell in love with the Napa Valley during their frequent visits with family. The stage was set.

On January 1, 1995, they played a modest house concert for invited guests at the home of Michael’s parents, Gail and Harry Adams of Santa Rosa, to gauge interest in the idea. Some of those in attendance have been supporters and board members ever since, most notably founding board president Ralph Mendelson. (Both Ralph and Melinda Mendelson would go on to play important roles for many years behind the scenes, each serving terms as board president).

In the first season, six concerts were planned over three weekends on a scant budget of only $5,000. The entire first season involved just seven musicians plus Daria and Michael, who played in every piece in every concert, to save money! Wineries that hosted Music in the Vineyards in the first season included: Louis M. Martini, Schramsberg, Kornell Champagne (now Frank Family of Calistoga) and Clos Pegase, beginning a tradition of generous hospitality by our vintner partners that has been a lynchpin to the success of the festival.

It cannot be overstated enough how the early success of MITV was made possible by the efforts of Michael’s mother, our founding Executive Director, Gail Adams. She brought to the festival her experience in corporate finance and arts administration along with a tireless work ethic; she arranged concert venues, publicity, fundraising, graphic design, printing, ticket sales and volunteer coordination. Following the inaugural season, she single-handedly assembled our first board of directors.

Harry Adams, Michael’s father, was also integral to the early success of the festival. In addition to backing up Gail in the office, he handled all the details of concert operations: staging, lighting, piano moving, chair rental and even car parking. Harry was a founding board member and our chief venue scout, always on the prowl for wineries with great acoustics.

From the beginning, Daria and Michael were the artistic team that programmed the festival, hired the musicians, and worked out complicated rehearsal schedules. Michael’s signature ‘program-notes-from-the-stage’ were a feature from day one, notably saving boatloads of money over the years from not printing them in the program.

The festival’s fourth season saw big changes. Prior to that, we had presented just three programs, each played twice, over three weekends. In year four we added a second program to each weekend. Operationally this was a huge change, as it required more musicians, more rehearsal time, and most importantly, more tickets to sell.

In 1999 Music in the Vineyards deepened its long-term relationship with Silverado Vineyards. Already serving as a concert venue, Silverado, through owners Ron and Diane Miller, offered MITV the use of the River House on the winery property. This was hugely important because for the first time we had a multi-function “home base”. Not only was it large enough to house musicians and hold rehearsals, it provided a central place for musicians and board members to gather and socialize.

The River House, with its beautiful veranda overlooking the pond, continues to promote a true festival “atmosphere” for the four weeks of activities, a crucial element that Michael and Daria envisioned from day one. The Miller family remains among MITV’s most generous contributors. Since 2005 they have offered the adjoining guest house as a musician residence as well.

In 2001, the MITV board took a bold artistic step forward in approving the purchase of a beautiful nine-foot “Hamburg” Steinway. The Steinway’s acquisition was not without financial risk as several board members personally guaranteed the loan needed for its purchase. The credit for locating this particularly fine instrument goes to long-time supporter Harvey Zuckerman. On his own initiative he placed a classified ad in the paper, which was read by the piano’s seller/owner in Los Angeles.

Surely the biggest challenge to ever face Music in the Vineyards occurred in the spring of 2002 when Executive Director, Gail Adams was diagnosed with pancreatic cancer. She died less than a month later, on May 1. Not only was her death a significant blow, as MITV was largely a family operation, but it cast a shadow over the organization’s ability to survive. In many respects, Gail Adams was the festival. She ran nearly everything single-handedly with great efficiency. The idea of doing it without her was daunting to say the least.

To the rescue came Joan Lounsbery, the former Executive Director of the Santa Rosa Symphony. She stepped in to manage that summer’s festival to completion with only 12 weeks until opening night. Joan stayed on for five fruitful years as Executive Director, overseeing a steady period of artistic and financial growth for the festival.

Through all the sadness of Gail’s passing, the organization came together in an unprecedented way to produce the 8th season. The emotional high point was the premiere of a new work by David Evan Thomas for soprano and string quartet, “To Live in This World” dedicated to Gail’s memory. (You can hear it again this August 23 at the Hess Collection, sung this time by Gail Adams’ granddaughter, soprano Tori Tedeschi Adams.) It was also in 2002 that the Pacifica Quartet made their MITV debut!

After Joan Lounsbery’s retirement, Evie Ayers took over as our new Executive Director. Evie came from the U.K. with 25 years’ experience in arts administration, which included managing festivals, touring opera companies and music venues. She has been an integral part of MITV’s success ever since. The 25th anniversary season will be Evie’s 13th!

In 2010 in an effort to build more awareness within the vintner community in the valley we held a “pro-am” style fundraiser entitled Roll Over Beethoven. Held at Silver Oak Cellars, the event involved amateur vintner musicians and professional musicians from the festival collaborating together in classical, jazz and rock ‘n roll. The evening was an unprecedented success with many of our vintner partners and friends participating.

In 2014, MITV launched its first Solo Instrumental Competition, replacing the 11-year old scholarship program. The winner gave a pre-concert performance as part of the festival, a tradition that continues to this day. (This year’s Competition Winners Showcase concert will be Saturday, August 2 at Silvagni Recital Hall, Napa Valley College. It willfeature this year’s three winnersas well as our 2019 Apprentice String Quartet, 2nd Street Quartet.)

Also in 2014, we celebrated the 20th anniversary of MITV by expanding from three weeks to four. As part of our celebration, we presented special events in smaller vineyard venues, called “3 by 3”, which were very successful. “Midsummer Mystique” was the gala fundraiser, held outdoors at Clos Pegase on the festival’s opening weekend. In the early morning hours before the final concert, the largest earthquake to hit the Napa Valley in decades threatened the end of the season. While there was extensive damage in Napa, our final concert was in the Cave Theater at Clos Pegase up in Calistoga, which escaped relatively unscathed.

2019 will be the second season for our String Quartet Apprenticeship Program, a three-week, full scholarship apprenticeship for an emerging young ensemble picked by national audition. With funding from the Napa Valley Performing Arts Foundation, MITV created the apprenticeship to provide intensive career training for a young quartet through working alongside our professional musicians, and to expand MITV’s outreach and community engagement efforts in the Napa Valley. The 2nd Street Quartet, based in Bloomington, IN will be in residence for the first three weeks of the festival.

A word about the artistic philosophy of Music in the Vineyards is apt, because it is central to how the festival developed and continues to this day. From the beginning, Daria and Michael vowed to avoid the pitfalls they observed at many other festivals—namely, too many concerts, with too few rehearsals. They vowed not to become a “brown-n-serve” festival, where musicians sweep into town for a minimum of rehearsals, play a few concerts and flit off to another festival.

Their goal was to ensure that there would be ample time to get to know not only the music, but their fellow musicians, the local community, and the beautiful surroundings of the valley. To that end, they insist that musicians remain ‘in-residence’ in the Napa Valley for a week at a time. The goal is to create a music-making environment that is both serious, yet relaxed. When musicians are well-rehearsed, well-fed and well-taken care of, they can’t help but play beautifully!

Thanks to the generosity of our winery venue partners and you, our supporters, it is noteworthy that Music in the Vineyards has consistently finished each fiscal year in the black for 25 years. This financial stability has been due in large part, to the success of our fundraisers, Kitchens in the Vineyards, Tables in the Vineyards and our gala auctions, like the 25th Anniversary Gala coming up this August 10. But most importantly, it is because our winery venue partners are so generous in providing both concert space and wine for our festival performances and because of our major donors who provide the annual lifeblood of this nonprofit organization.

Today we are here readying for our 25th Music in the Vineyards festival with 46 musicians, 16 concerts—including one in San Francisco—a gala fundraising concert, 4 free open rehearsals, and a newly commissioned work by composer TJ Cole. A lot has changed in the past quarter century, in great part thanks to you, our family of major donors. Thank you for believing in us and supporting the expansion of Music in the Vineyards into the internationally-recognized chamber music festival it is today!