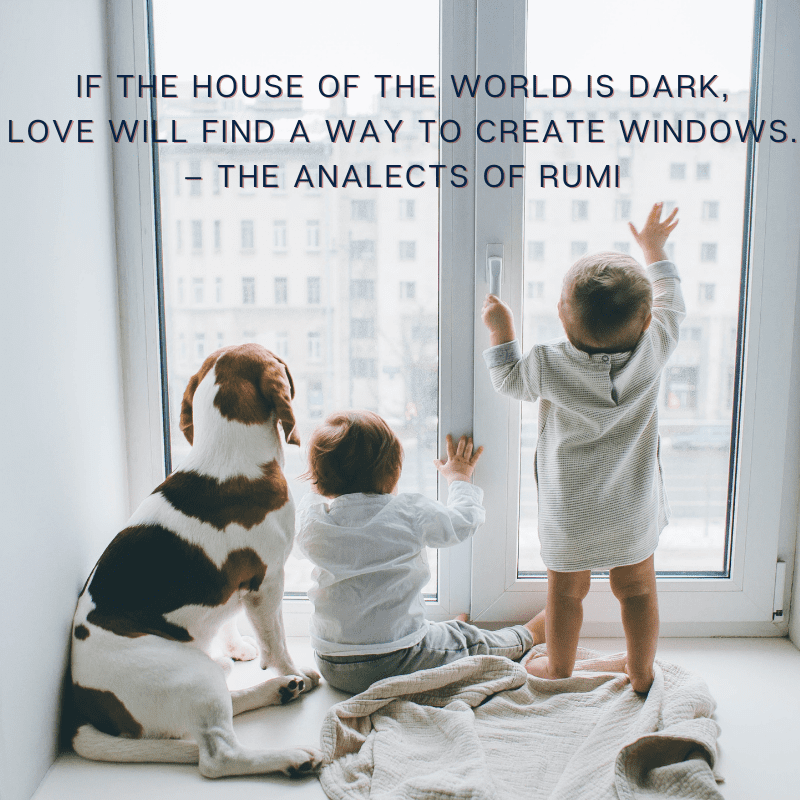 Feel free to share this message to your sphere or use on your social platform, website or even email a friend.  Interested in our marketing services please go here

“If the house of the world is dark, love will find a way to create windows. – The Analects of Rumi

This quote is taken from the book Analects of Rumi and share shares the mystic words of the most popular Persian poet, Rumi. He is considered as a great spiritual master and made use of everyday life’s circumstances to explain the explore the spiritual world. His poems have acquired popularity worldwide and have translated into different languages.He acquired wide knowledge of spiritual matters and in 1231 AD, he became a prominent religious teacher.

Jalal ad-Din Rumi (1207 – 1273) was a Sufi mystic and Persian poet. His mystical poetry has a universal appeal, which has made him one of the most celebrated poets of the modern age.

Rumi was born in 1207 in Wakhsh (present-day Tajikistan), in what is now Afghanistan. He frequently travelled throughout his life, due to the political turmoils of his era. After the Mongol invasion of Central Asia around 1215, Rumi’s family moved steadily westward. They visited Baghdad (in modern-day Iraq), Persia (modern-day Iran) and made a pilgrimage to Mecca. The family finally settled in Konya (modern-day Turkey)

Rumi was brought up in the Islamic faith and became well acquainted with the Quran. Rumi became a celebrated scholar and was admired for his learning. At the age of 25, Rumi took up a position as the Islamic Mmolvi of a madras in Konya. Although following the Sufi path, he became an Islamic jurist and gave sermons in the mosques of Konya.

However, his life changed when he met the wandering Sufi mystic Sham al-Din in 1244. This meeting had a profound impact on Rumi, he felt Sham to be a divinely inspired person, and he took him to be his Guru. Under the guidance of Shams, Rumi lost interest in the more cerebral academic studies and became enamoured of the way of the mystic – the path of the heart. Rumi became an ascetic and devoted to the unorthodox spiritual path.

Only four years after meeting Shams, Shams disappeared (rumours suggested he was murdered with the connivance of Rumi’s son, jealous of his father’s devotion to Shams). Rumi’s grief led to some of his greatest poetry in the Divan-e Shams-e Tabrizi.

This spiritual devotion manifested itself in Rumi’s ecstatic mystical poetry. In particular, Rumi captured the divine romance of lover and beloved – the perpetual yearning for the Divine.

The flowers are blooming with the exultation of your Spirit. By Allah! I long to escape the prison of my ego and lose myself in the mountains and the desert.

Through his poetry, Rumi expressed his philosophy which included tolerance of all religious beliefs, the importance of goodness and charity, the belief in reincarnation and the soul’s evolution. Rumi also playfully hinted at the limitations of conventional morality and religion – hinting the way of the heart transcended religious doctrines. Above all, he advocated the importance of love. Rumi passionately believed in the capacity of poetry, music and dance as a path to union with God.

Both light and shadow are the dance of Love. Love has no cause; it is the astrolabe of God’s secrets. Lover and Loving are inseparable and timeless. Although I may try to describe Love when I experience it I am speechless.

When we are dead, seek not our tomb in the earth, but find it in the hearts of men.

At his funeral, which lasted over a month, he was visited by Muslims, Jews, Persians, Christians and Greeks.

Rumi’s teachings and poetry formed a basis for the practice of the Whirling Dervishes and the path of the Mevlevi tradition of Sufism. Rumi’s faith was born from the Islamic religion. He makes frequent reference to the Quran.

Flee to God’s Qur’an, take refuge in it there with the spirits of the prophets merge. The Book conveys the prophets’ circumstances those fish of the pure sea of Majesty.

However, Rumi was never limited to scriptural interpretations of religious doctrine. He taught and exemplified the fact that the essential aspect of religion is an individual seeking and personal experience of the divine. According to E. Brown, Rumi was a Sunni Muslim, but it an interpretation of Islam that was mystical and universal.

As with any space make it your own. We love finding great ideas and sharing them with you. Decorating for a season and or a holiday doesn’t have to be expensive. Hit your local flea markets, thrift shops and yard sales. you will be surprised at the awesome decor items people are practically throwing away. Below are a few of the items we found on Amazon you might like. Amazon is a great place to start. Thousands of sellers selling just about anything you can imagine. We hope this has inspired you to bring Fall home…