12 Oct Why Apple Pie Isn’t So American After All

“As American as Apple Pie”

The surprisingly un-American history of our country’s most iconic dish.

As we gather with loved ones to celebrate Thanksgiving this November, apple pie—perhaps our country’s most iconic dish—will make its annual appearance on many celebratory tables.

But despite being a symbol of patriotism eaten to celebrate everything from the Fourth of July to Turkey Day, apple pie’s origins actually aren’t all that American. A quick look at its history tells us that only through revisionism has this dish come to represent the United States; even more, in the process we may have ignored the historical and cultural influences that have shaped its place in our country’s narrative. Which begs the question: Should we even consider apple pie a national symbol after all?

The History Of Apple Pie

Rather than the good old US-of-A, apple pie as we know it first originated in England, where it developed from culinary influences from France, the Netherlands, and even the Ottoman Empire. In fact, apple trees weren’t even native to North America until the Europeans arrived. Only crab apples grew on the continent; shrunken and sour, they were barely used for eating, let alone for pastry.

Indeed, many of the other ingredients necessary for apple pie also come from beyond America’s borders. Wheat originated in the Middle East, while pastry fats like lard and butter arrived when Christopher Columbus brought domesticated pigs and cattle to the New World. Crucial spices like cinnamon and nutmeg, meanwhile, came from far-flung countries like Sri Lanka and Indonesia. And of course, the art of pastry stemmed from a melting pot of culinary traditions in mainland Europe, particularly French, Italian, and Arabic.

As for the dish itself, the British and Dutch made their own versions of apple pie long before the Declaration of Independence or even the first Thanksgiving. Though most British pies were savory, apple and other fruit-based pies were common dishes, and one of the first recipes for apple pie appeared in England as early as the 14th century in The Forme of Cury by Samuel Pegge.

So how did apple pie, a dish eaten centuries before America’s first president was even born, become an enduring patriotic symbol? 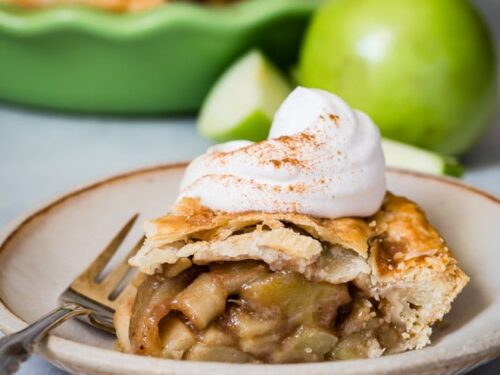 Eventually, European settlers brought the dish to the colonies, where they used the domesticated apples they had introduced to the continent to make pies. The dish quickly caught on. Not one but two recipes for apple pie appeared in America’s first cookbook, American Cookery by Amelia Simmons, published in 1796. From the colonial period, the dish endured during the 19th century and through the Civil War. John T. Edge shares in Apple Pie: An American Story that even in wartime “both Union and Confederate troops scavenged for apples and commandeered the hearths—and flour bins—of white farmers and black tenants to bake pies.”

An easy, affordable, and adaptable dish, apple pie went on to become a staple in American cuisine throughout the 18th and 19th centuries. However, it didn’t become part of the cultural lexicon until around the 20th century, when such influential factors as advertising, news, and war created a new, misleading narrative that transformed the dish into a nationalist symbol.

One of the earliest examples of this shift can be traced back to 1902, when a New York Times editorial argued for the dish’s national importance by asserting that pie had become “the American synonym for prosperity.” “Pie is the food of the heroic,” it declared. “No pie-eating people can be permanently vanquished.” The dish was also positioned as unique to the United States when The New York Times published a 1926 article with the headline “The Tourist Apple Pie Hunt Is Ended: American Army Abroad Has Failed Again to Find in Europe ‘the Kind They Make at Home.’”

As American As Apple Pie

Eventually apple pie became associated with the U.S. government, another powerful force in its myth-making as an American symbol. In 1935, Congress turned to apple pie to settle a squabble between New York and Oregon, who got into a heated debate over who produced the best apples. After Oregon sent free apples to Congress to prove their superiority, New York retaliated by sending 75 apple pies to the Capitol. Representatives on both sides of the divide sampled slices and offered their take, while the Oregon representative sniffed, “The crust was excellent, but there was not enough filling to really find out what New York apples taste like.” Peeved to be left out of the debate, Connecticut later chimed in to assert that “apple pie made by a Connecticut cook from Connecticut apples cannot be surpassed by New York, Oregon, or any other state!”

Later, the dessert became even more patriotic when the President got involved. In 1951, Franklin Roosevelt’s White House head housekeeper Henrietta Nesbitt wrote in her Presidential Cookbook: Feeding the Roosevelt’s and Their Guests that “apple pie was the President’s preference among pies” and added that it was “generally conceded to be the All-American favorite.”

With the outbreak of World War II came another opportunity for apple pie to solidify its status as the definitive national symbol. Most notably, American soldiers began to proclaim they were fighting for “mom and apple pie,” an assertion that firmly established the dessert as a metaphor for the United States. Back home, The Victory Binding of the American Woman’s Cook Book: Wartime Edition, published to provide recipes adapted to wartime rations, included a recipe for “Victory Apple Pie.” Meanwhile, journalist Charles Hurd described one World War II veteran as “as American as apple pie,” while The New York Times dubbed an actor the perfect choice to depict American ambassador Joseph E. Davies in a film because, in part, “his manners are as indigenously American as apple pie.” The inclusion of “indigenous” is particularly notable because, of course, it wasn’t remotely true. 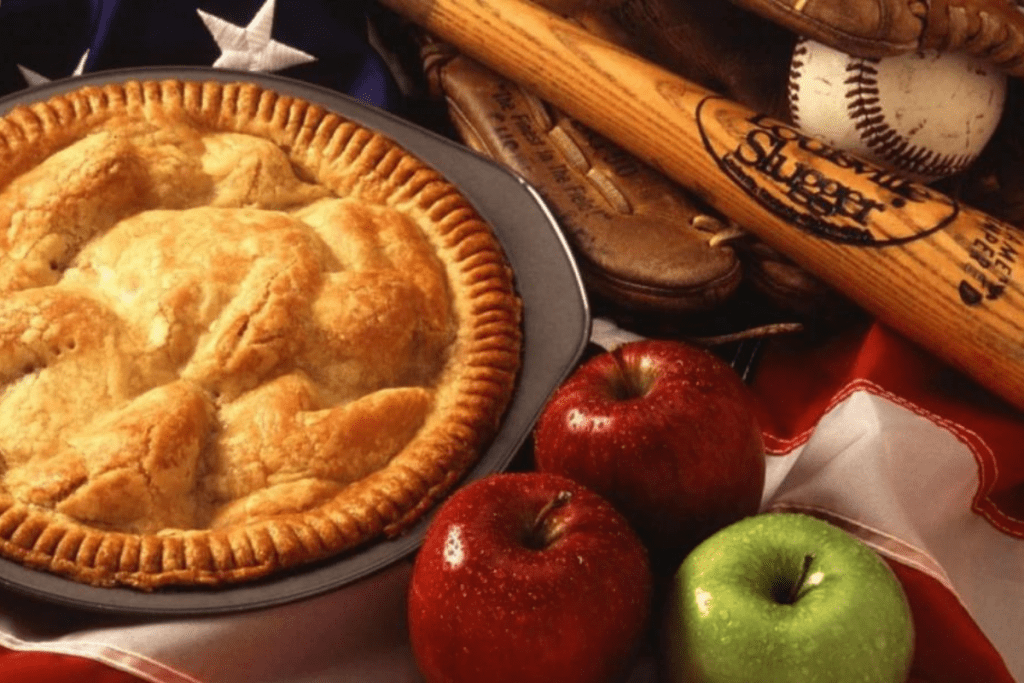 At the same time, apple pie’s association with mothers conjured a wholesome, hearty image for the dessert that hammered home idealistic American purity. In a November 1945 issue of The Louisville Times, for example, food editor Marguerite T. Finnegan gave advice on how “to fulfill the family dream of apple pie” amidst wartime shortages. In addition, the emergence of the phrase “as American as motherhood and apple pie” led the dish to emerge as a symbol of feminine love. As cookbook author Jessie DeBoth wrote in her 1951 book It’s Easy to Be a Good Cook, “[Pie] symbolizes so many things: the energy and effort of the woman [a man] married; her wish to give him the utmost in eating enjoyment; her competence in fitting a pie into her never-ending day of homemaking.” And beyond just motherly love, the dish represented a rustic, agrarian past that evoked nostalgia for the mythic America of a simpler time, before the widespread urbanization of the country.

With these kinds of associations, apple pie became emblematic of a very specific American ideal: wholesome, hearty, pure, and noble. Because of its association with powerful factors like the U.S. government and military, it was rewritten as a symbolic dish that represented traditional American ideals, and by extension, traditional American families. This symbolism also carried the implication that the dish itself is native to the United States, a mindset that echoes a tradition of willful ignorance of white colonialism.

Of course, this framing ignores the actual history of apple pie and its origins overseas, and represents a falsely constructed narrative of our culture and history. But should all of this mean, ultimately, that apple pie can’t be a symbol for our nation?

Despite its manufactured symbolism, apple pie actually does embody American values—just not for the reasons we may think. Apple pie is not American because it is wholesome and hearty, and certainly not because it is indigenous. It’s American because it embodies the way cultures and traditions from all over the world have blended, reshaped, and ingrained themselves into the fabric of this country to define the reality of our national narrative.

As John Lehndorff of the American Pie Council explains, “When you say that something is ‘as American as apple pie,’ what you’re really saying is that the item came to this country from elsewhere and was transformed into a distinctly American experience.” Indeed, as Libby O’Connell writes in The American Plate, “The phrase ‘as American as apple pie’ is only misleading to those who forget that, except for American Indians, we are all transplants on this continent, just like apple trees.”

In many ways, apple pie embodies the immigrant experience—which, in the end, is the most distinctly American experience of all. A fruit that originated in Kazakhstan starring in a British pastry and beloved by people across the United States transcends national and cultural boundaries in much the same way as a Greek immigrant operating a burger joint or a Chilean refugee founding a fashion label or a Puerto Rican woman serving in Congress. The United States was woven from the cultural influences, histories, and traditions of countless populations who have made this country their home, creating a richly vibrant culture that is distinct all on its own.